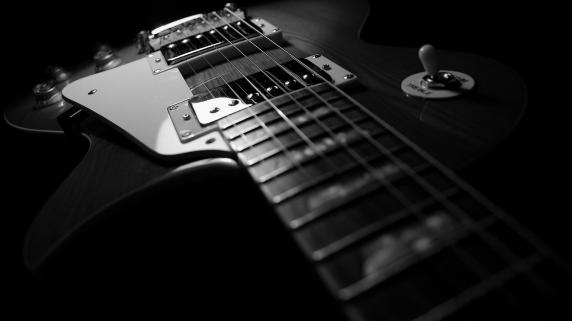 One of the first things I chose to do the day after The Balance of Light was released was to set one of my guitars to an alternate tuning.

No, really.  All my guitars have been in the usual standard EADGBE tuning for years, and over the last few years, I’ve noticed that I’ve been playing the same damn chord progressions and melodies for far too long.  I love writing new songs, but I haven’t been inspired enough to come up with that many new riffs that I haven’t already used elsewhere.  I figured it was high time to change it up.

My six-string Taylor acoustic is now in the DADGAD alternate tuning.  This is for two reasons:  one, so I’ll finally force myself to learn how to play it that way, and two, so I’ll pick up that guitar more often.  My sister’s a big proponent of this tuning as she loves the versatility it provides.  I’ve been meaning to do this for ages, and now that I have the time, I made the move to get started on it.

So what does this have to do with writing, anyway?  Why am I posting this here and not at Walk in Silence?  Well, mainly because I’m doing the same exact thing with my writing, now that I have the time to dedicate.  After years of focusing on the Mendaihu Universe and everything that goes along with it, I suddenly find my brain with a lot of extra processing power again.

So this means that I’ve decided to take some steps that I’ve been wanting to take for quite some time now.  The pre-writing work for Meet the Lidwells! has included a full outline — something I’ve nearly always avoided in the past.  I’m also playing around with the post-production work early on, since I already have a good idea of how it’ll look and where I think it might sell.

I’ve been reading a lot of different authors and genres lately.  I’ve been picking up on the varying styles and moods.  I’ve been figuring out how to write a much smaller standalone book with a much smaller cast.  I’ve been paying attention to how different races and genders are written.  Part of this is so when it comes time for me to write something similar, I’ll do it correctly.  Part of it is also because of my fascination in how stories are told from different cultural perspectives; I’m so overly familiar with how Americans tell stories that my own start to sound a bit…bland, so I’d like to try writing my stories from a slightly different perspective.

[Noted, I’m sure someone somewhere will complain that I’m falling into SJW territory, but that couldn’t be further from the truth.  I won’t write my novels purely for political reasons, because I already know I’ll fail miserably and they’ll read like crap.  The only reason I want to write from different perspectives is because I want to.  End of story.]

What else do I plan on doing to freshen up my outlook?  That’s a good question.  The Day Job does kind of keep me from playing around with my writing schedule, though there’s still room for shaking it up a bit.  I wake up early on the weekends whether I like to or not, so perhaps instead of draining my phone battery trawling the internet or watching several repeat cycles of the local news, perhaps I could use that time for creative endeavors.

I’ve also been extremely lax on my artwork, especially over the last year or so!  I’ve got some fresh pencils and pens that I’d love to start using again.  The art process has always been an enjoyable and calming one for me and I don’t utilize it nearly as much as I’d like.  I’d also like to be a better artist than I currently am, to be honest.  I’m okay, but I could be a hell of a lot better at it.  Same with my photography.

Will any of this end up in my future novels?  Sure, why not?  My reading a crapton of music biographies inspired the interview format for Lidwells.  My immersion in music inspired a fresh outlook on my writing.  My photography is sneaking into my side project of creating book covers.  And my knowledge of art has definitely helped me visualize scenes when writing.

Now that I have more time, I’m really looking forward these new perspectives.