So tonight I decided to play around a bit with the cover for The Balance of Light, even though it’s still quite some time before it’s going to see ebook or print.  This one was tough, because I had an idea of what I wanted, but looking for the right picture was going to be a tough one.  I wanted something to balance out the blue/yellow night view of A Division of Souls, so I knew it would have to be yellow/blue and morning.  I had the color scheme down, but the picture was the tough part.

I’ve said before that I really love this part of the self-publishing process; I mean, really love it.  Like, to the point that I may possibly do this as a side-job in the future.  I love looking for that perfect shot.  Trying to get the perfect crop balance.  Figuring out whether to adjust the color or give it a bit of an effect.  Playing around with fonts and text placement.

I’ll be honest, it’s like I’m making fake album covers.  It’s something I used to do as a teenager with my mixtapes and the Flying Bohemians tapes.

Let’s take a quick look at the three covers I’ve made so far: 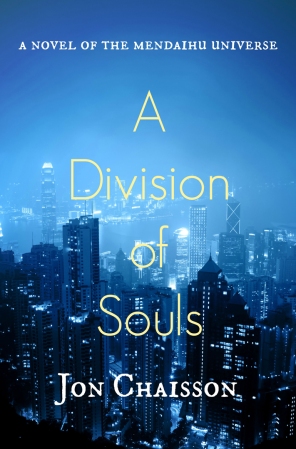 The cover for A Division of Souls was meant to invoke a few things:  the setting (a metropolis, teeming with people), the time (at night), and mood (tense and mysterious).  It’s also to serve as a tie-in to the very first scene.  In short, my aim was to say: this is what the book’s going to make you feel.

The cover was also supposed to tie in with the other two books, which means that I also had to think ahead:  what were the other two going to look like?  I knew I’d have to keep a few visual motifs going…a city would have to be involved in all three, somehow; the images would need to evolve, just like the story itself.  In this case, I created multiple ‘lightboxes’ in my Shutterstock account and started looking for pictures that would do exactly what I needed them to do.

The time it took to throw this one together was surprisingly quick, to be honest.  Looking at it now, I can see a few things I should fix, but for the most part it went smoothly, once I knew exactly what I wanted to do. 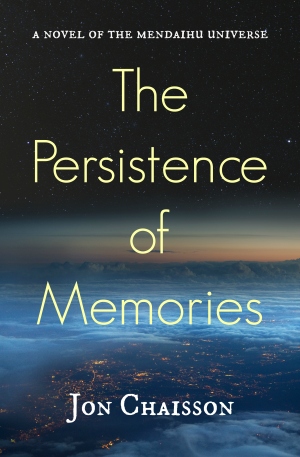 The cover for The Persistence of Memories was a bit trickier, and I think it looks better as an e-book cover than it does as a trade paperback cover, but I do like how it came out.  The same rules applied here…in this case the setting was twofold: it takes place both on Earth and on Trisanda, so I chose to do a ‘satellite’ point of view that shows both the city below and the stars above.  Time seems to be fluid in this shot.  It seems to be late night in the city below, blanketed by the similar blue (not exactly the same but close) of the first book, but in the heavens, time is irrelevant; it’s all light and dark at the same time.  It also creates a dreamlike mood, where you’re not entirely sure what’s reality and what isn’t.

The placement of the title was purely serendipity, to be honest; I did not expect the top two words to be in space and the bottom two to be in the planet’s atmosphere.  It just turned out that way and worked out quite nicely.  Funnily enough, once I’d noticed that, I was torn on exactly where I should place it…the other outtake had the title dropped a tiny bit lower, so the “of” is resting right on top of the gray cloud line instead of hovering over it like it is.

I haven’t made a solid decision yet on what the Book 3 cover will look like but this is what I came up with tonight: 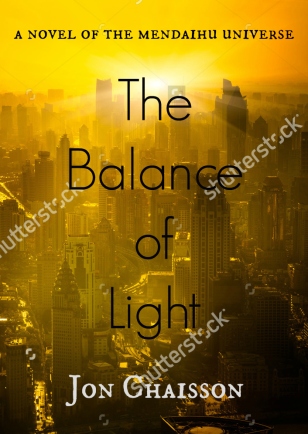 I’m still playing around with the font color for the title, as well as the placement of the text.  The picture hints at the metropolis of ADoS, but the mood and the time is different: we’ve gotten through the late night of Book 1 and the witching hours of Book 2, and now we’ve come to the morning after of Book 3.  The yellow of the sunlight is supposed to hint at the yellow font of Book 1, and I’m still trying to figure out which bluish hue would be good for the title (to hint at the blue cityscape of ADoS).

One thing I learned early during this process was that I shouldn’t merely look for something that ‘looks cool’, no matter how tempting it may be.  The last thing I needed was to look for something shiny, because I didn’t want the casual viewer to say ‘wow, what a flashy cover’ but not completely connect with it or remember it.  I wanted something unique.  Something that stood out from other covers, not because it was the flashiest, but because it was different. Something to catch their attention because it stood out just enough.

These first three are my first attempts at doing book covers, and as you’ve probably noticed, there are no actual people on the cover.  This was a conscious choice; not only is it because of the large cast, but because I also wanted to invoke the idea that it wasn’t just my characters being affected by the story, but planet itself.

My next couple of projects do involve a much smaller cast, so there’s a very good chance I may use people (or silhouettes) on their covers.  I did a brief Shutterstock search for those and found a few ideas to work with, and I’m looking forward to these when I get to that point.  The main drafts of these stories haven’t even been written yet, or at least not completely, so again this was a bit like creating fake album covers!  In the process it’s giving me something fun to look forward to.