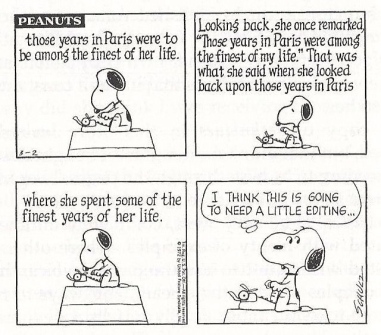 Yeah, I know.  The author really shouldn’t be the editor of their own work, for many reasons.  We’re so deeply entrenched in our own stories that when it comes time to edit the story, it’s often hard (if not impossible) for us to detach ourselves.

Yes, I’m familiar with Arthur Quiller-Couch’s “murder your darlings” maxim.  But I’ve never been a big fan of the pithy writing quote (Ray Bradbury is an exception), so I usually tend to respond to those with a “yes, that’s nice” and move on.

Don’t get me wrong, I’m not an auteur or an artiste in that respect.  I’m totally open to comments and suggestions from beta readers, and I’m perfectly willing to delete something that is in dire need of deletion.

This current editing session, which I’ve been referring to as the Final Line Edit, has been fast and furious.  I’ve deleted dozens of weak lines, removed filler dialogue, reworded sentences to make them shorter and stronger, and rearranged paragraphs to maximize the flow.  I’ve used the Find feature a handful of times to fix continuity.  This is how I work when I actually give myself a strict deadline with a specific date: I get my ass in gear.  The “I’ll fix it later” becomes “let’s fix this now”.  I become super-vigilant about anything that doesn’t feel right, and think of a way to make it better.  I’m about halfway through this edit, and I’m already seeing progress.  I’ve lost at least ten pages worth of chaff, and I’ll probably see another ten disappear by the time I’m done.

[The irony is that I was hopeless at deadlines during my school days.  My essays and term papers were decent but always late.  Go figure.]

So what have I learned this time out?

I’ve learned that self-editing can be done, if you’re up to it, know how to do it, and give yourself a plan of attack.  I’ve kinda-sorta cheated because I’ve reread the entire trilogy enough times that I’ve lost count.  It’s made me become ever so slightly detached from the story, becoming more its Reader than its Author.  And the more I read it, I become less its Reader than its Editor.  I can now see it with enough detachment that I can clearly see what needs work and what doesn’t.

That’s the trickiest part.  Does this mean I’ll never enjoy my own writing?  Far from it — just last night I just passed one of my favorite scenes and still got chills.  I was amazed that I had written this!  Me, the goofball who often trips up on his own words as he’s talking and gets brainfarts when trying to think of a word or a name.  And that’s when I realized I was doing it right, at least in my own haphazard but ultimately successful way.

I’m sure I’ll have a lot more to say about this, but alas, I have editing to do before night falls!