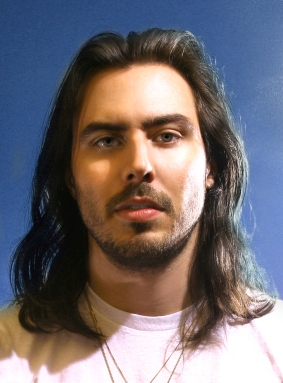 Yes, Andrew WK!  When I picked the Bridgetown Trilogy back up in 2010 and started rewriting and revising it, it occurred to me that my original physical description of the character wasn’t quite working.  I’d originally envisioned Saisshalé as a cross between a beefcakey dude, a bouncer, and that crazy guy you cross the street to avoid.  That didn’t quite jive with his true nature, though, so I started thinking about it a bit more.  A short time later, I’m listening to one of my older mixes and “Party Hard” comes on, and it dawns on me: AWK is actually a SPOT-ON physical match!  So I ran with it, and come to find out, the more I saw him playing the role, the better my revision of the character started to be.  So it all worked out just fine.

And no, he’s not the villain.  He’s merely the spiritual opposite of the One of All Sacred.  He gets a few unnamed cameos in A Division of Souls, but he’s in quite a few scenes in both The Persistence of Memories and The Balance of Light.

[As an aside: it really is hard to find a serious picture of Andrew WK online that doesn’t involve him partying hard, making faces or jamming with his pizza guitar!]

Q: What’s the origin of Saisshalé?

A: Saisshalé [say-SHAH-ley], as mentioned above, is the spiritual opposite of the One of All Sacred.  I came up with him around late 2001 when I needed to have someone just as strong spiritually as Denni was.  He was to be her equal across the board: whatever action Denni took, he would respond with equal force.  This presents a serious conflict between the two, because they’re both refusing to back down from what they believe is the right thing to do.

He originally had a much longer, more tongue-twisty name, but during the 2010 reboot I chose to change it.  I wanted to hint at a kiralla background, so I chose to go with the very sibilant sounds, and referred to my Anjshé glossary.  It comes from the words sa’im (sah’EEM, a qualifier used to add grandeur or excitement) and D’haff Sshalé (djaff SHAH-ley, lit. ‘dark-minded reptile’ but usually refers to someone stubborn and/or cruel).  In short, sa’im + Sshalé = Saisshalé.  In a way, his name translates to ‘Grand Reptile’, a rather cocky reference to his spiritual history.

Q: What is his history?  He’s kind of a weird character.

A: He is that, but I love writing him, because he’s a let’s see how far I can take this kind of guy.  I go into more detail in TPoM, but the short version: he was known as a vengeance deity during Trisanda’s very early spacefaring years: he was known as a brilliant tactician who was able to plan out and execute incredibly complex war plans.  He ascended to deity status similar to Denni, actually.  However, just like Denni, he hasn’t completely ascended yet.

Q: Why is he feared?

A: Basically because he projects the personality of a sociopath.  He can be extremely friendly, but his actions can very frequently be seen as amoral.  He often claims that he only acts this way ‘because he must’.  [And here’s the rub: if you actually sat down and analyzed his actions with what incited them, especially with comparing his actions to the One of All Sacred’s, he’s 100% correct in saying that.]  That’s not to say he’ll tear off your head for no reason; he would never do such a thing, and would be offended by such an accusation.  In short: he’s a pure Shenaihu, driven completely by spirit and reason, even if that reason goes against expected social mores.

A: Saisshalé is quite tall, about the same height as Governor Rieflin.  His connection to the One of All Sacred goes a bit deeper than anyone knows or expects…and we’ll see more about that in The Balance of Light.  His voice is low in range, but not quite bass; when he speaks, he uses both vocal and innerspeak at the same time, so his words hit you especially close.  He also uses both his muscles and Lightwork for his physical actions, so he comes off as frighteningly strong.  Despite his reputation, he can actually be quite friendly and chatty.  And absolutely no one knows what he does during his down time, not even me.