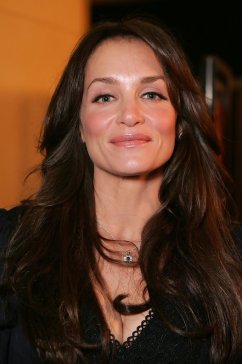 Q:  What is Caren’s origin?

A:  Caren is actually the first new character I created for the trilogy back in 1997 when I started The Phoenix Effect.  I came up with her (as well as Alec Poe) on that first day of writing.  I’ll admit there was a slight inspiration from The X-Files which I was a fan of at the time, as I was looking for two investigators who were put into a situation they weren’t exactly comfortable with.

Q: She’s got a Mendaihu name as well.  Why is that?

A: Her Mendaihu name is Karinna Shalei.  [First name pronounced ka-RINN-nah].  She was given it by her parents, Aram and Celine Johnson, who were high-level Mendaihu adepts as well as agents for the Alien Relations Unit.  The Mendaihu blood runs extremely strong in her entire family.  She takes this name very seriously, and never uses it frivolously.  The same with her sister Denni; she will not call her ‘Denysia’ unless it is warranted.
The giving of Trisandi clan names to those from Earth is not considered appropriation by the Meraladians; they actually consider it a form of incredibly deep respect, as they feel these people are willing to completely embrace their ancient physical and spiritual connections with Trisanda.

Q: That’s Kristen Cloke up there.  Is that who Caren is based on, physically?

A: Yes!  In fact, she was inspired by Kristen’s role as Captain Shane Vansen in Space: Above and Beyond (of which I was a HUGE fan).  Someone who isn’t entirely happy with the role she’s been given, but that won’t stop her from performing it to the best of her ability.  Like Vansen, Caren is also someone who takes her responsibilities very seriously, especially when it comes to those she works with or mentors.  Caren connects personally and spiritually with everyone she meets.
I can even tell you the scene where it dawned on me that she’s definitely Caren: it’s a rare and very personal conversation between her and 1st Lt. Cooper Hawkes in the episode ‘Hostile Visit’, which takes place just before they’re about to head out on a dangerous mission.  This is definitely a conversation she’d have with Alec Poe.

Q: Her relationship with Anando Shalei seems to be somewhat unique.  Has she always questioned her relationships, romantic and otherwise?

A: No, not always.  The death of her parents really took a lot out of her emotionally, and because of that she keeps a specific distance from others, for fear of getting too close and then losing them as well.  She’s fully aware of this decision, and has never let it completely get to her, knowing full well that she has to move past that.
Caren’s connection with others is definitely unique; it was partly based on a few friendships and relationships I’d had where I simply clicked with the person on a deep level in a very short amount of time.  It’s not merely a romantic or sexual attraction she has with Anando, but a spiritual one.  And because of that, Caren is nervous at first, wondering how it could possibly work.  The longer they’re together, however, the more they learn to rely on each other for comfort, affection, and a firm base of spirit.
Her last serious relationship before Anando was with Agent Sheila Kennedy, though they both decided to end it due to their work situation and remain close friends.  They still flirt with each other now and again, mostly for the humor of it.
As for friendships, she is extremely loyal, and will always have your back.  She also has a very thin filter, so she’ll often say what’s on her mind, even if it bothers you.  She takes every kind of relationship seriously.  Especially the one with her sister.

A: She often has trouble falling asleep at night, as she often lets her thoughts run rampant near the end of the day.  She’s been trying her best to fix that.  She has a scar on her thigh from a bullet grazing it during an investigation.  She has exceptionally strong night vision.  She can be very impulsive and impatient sometimes, which has gotten her in trouble now and again.  She’s got a very snarky sense of humor.  She won’t admit it to Poe (who will surely never let her hear the end of it), but she really does enjoy dressing up fancy now and again.  She’s an avid music fan and has quite a large collection; her tastes depend on mood and situation, but she has a soft spot for meditative music, especially when she’s had a taxing day at work.  She’ll always say her happiest moments are when she’s hanging out with Denni.

And yes, she has a theme song:  Lamb’s “Gorecki”.  It’s exactly how she feels about Anando, even if she has trouble articulating it to him or anyone else.