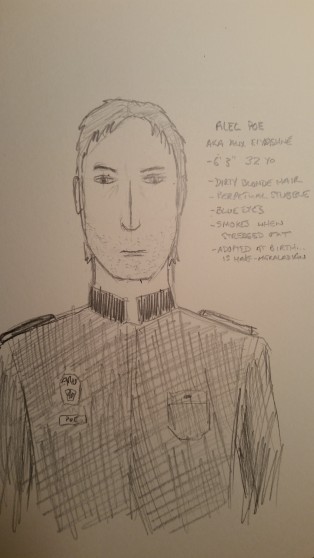 Please welcome Alec Poe, emha si edha!  Alec looks a little tired here for his mug shot, but that’s because HR took it first thing in the morning, and he’s not a morning person.  More to the point, he’s definitely a night owl.

A little bit about Alec, who’s often referred to as “Poe” at HQ and by his closest friends: he’s half-Meraladian and was given up for adoption when he was an infant, and grew up with the Poe family in the blue collar McCleever South district, where he still lives in the same apartment.  Like his ARU partner Caren his extrasensory abilities are above average (this will be a major plot point later on).  He’s very protective of his friends and extended family.  He’s a semi-habitual smoker who often lights up when he’s under severe stress.  In large crowds he’s more of an observer than a participant, but within his inner circle of friends he’s quite intelligent and chatty.