I know I’ve shared a few of these over on Live Journal (and a few in earlier WtBt posts) in the past, though I figured it would be fun to create a bit of a visual scrapbook of places related to the Mendaihu Universe over the years.  I made it a point to write whenever and wherever, so I quickly got used to finding a nook in whatever apartment or house I lived in.  All I need is a few plugs, a PC, my music collection, and I’m golden. 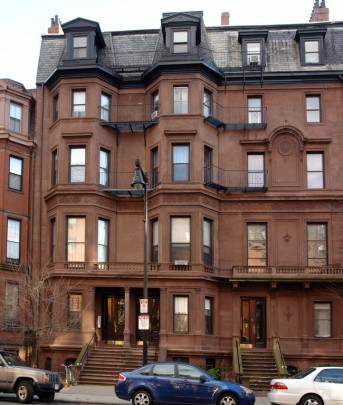 It’s kind of squeezed off to the side of the picture here, but the brownstone with the single stairway is 213 Beacon Street in Boston.  I lived here from autumn 1993 to autumn 1994 in what I’ve called the ‘shoebox apartment’.  I lived on the top floor in one of the two rear apartments.  It was a one-room place with a very cramped bathroom, exactly one window, a sort-of kitchenette in the walk-through from the apartment door (stove on one side, with the sink, fridge and a few cupboards squeezed in on the other side).  In typical Back Bay fashion, it’s a partitioned former mansion with high ceilings, which means that the sleeping area was a prefab loft.   It was tight as hell, the air never circulated all that well, and it got stupidly hot in the summer, but it had a great view of the Prudential and John Hancock Towers down the street.  I spent $500 a month on it; as of this year, the going listing is twice as much.

I know, you’re asking…why live in an expensive and sort of posh part of town?  Well, this was right down the street from Emerson College (back when its main campus was at the intersection of Berkeley and Beacon), and it was within walking distance of a lot of places I could go without spending a lot of money.  It was also a shortish walk to the Copley Square T stop, where I’d catch the subway to work (the Longwood Ave branch of the Harvard Coop).

This is where I first came up with the Vigil idea, after a binge of watching all different kinds of anime series and OVAs.  I of course didn’t have a computer at the time, so I made do with writing longhand in one of my many notebooks and my trusty old electric typewriter.  And when a year or so later I started on the True Faith project, my then girlfriend and I would talk about the story either here or her apartment on South Russel Street.

This next apartment was 178 Brighton Ave in Allston — I shared this 2-bedroom place for $800 with a Berklee student from autumn 1994 until I moved back home in autumn 1995.  Our place was the top floor front apartment on the east side; my room was the left two double windows above the front door.  A bit cheaper place to live, and a lot of small mom & pop stores in this neighborhood that kept me from spending too much money.  There was a Dunkies right across the street so if I needed my coffee fix, I’d just do a quick jaywalk and be back in minutes.  There was also a laundromat across the way as well, which was excellent; I didn’t have to shlep my stuff all over creation like I did my previous place.  When I first moved here I was working at Brigham’s Ice Cream on Cambridge Street, but soon moved the Loew’s Theatre up in Somerville.  That was roughly a 3 mile commute (B line to Haymarket or North Station, switch to the Orange line, head up to Sullivan Square, and walk 3/4 of a mile to the theater near Assembly Square Mall*) — a lot of music listening and reading took place then.

I did a hell of a lot of writing at this apartment.

I’d borrowed my then girlfriend’s PC while she was back home for the summer, and started transcribing everything I wrote using MS Write, saving it on 3″ disks (which I still have).  This included the Infamous War Novel, my various trunked ideas, the poetry, the song lyrics, and more.  I completely rewrote an old screenplay in exactly one month to see if I could work under deadline.  I even attempted to write a short story here.  This is where I first decided I was going to write every day, come hell or high water.  It’s also where the bulk of True Faith was written as well.

I posted the HMV pictures not that long ago (this particular entry from October), so you’re already familiar with where I did my longhand writing work from 1997 to 2000. 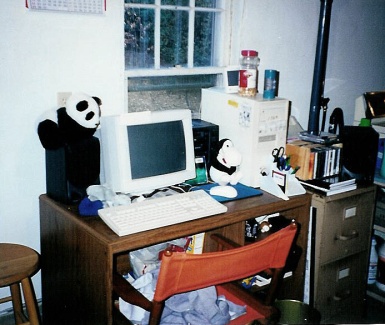 And of course there’s The Belfry, the desk that I’d work at between 1996 and 2005, in the basement of my parents’ house.  I’d moved my computer down there early in 1996 and continued with my transcription work and trying out new projects.  My idea was to treat this as my office, with office hours, and getting a set amount of work done.  During my HMV years I’d transcribe and revise the longhand work I’d done earlier that day; then in late 2000 when I changed jobs and started at Yankee Candle, I started the rewrite of The Phoenix Effect which eventually became the Bridgetown Trilogy.

Lots of good memories down here.  I loved working in the Belfry.  Headed down there at 7pm and worked straight until 9pm, or until I hit a thousand words.  Worked down there in the stifling heat of summer and the ridiculously freezing cold of winter.  Too many snacks eaten…and far too much Mountain Dew.  Countless games of FreeCell.  At least three different computers before I finally bought a new PC in 2003.  Quite a few compilations, both on tape and CD.  Wednesdays were a treat because I’d come home from my weekly comic book and music purchasing trip after work, and listen to the new CDs I’d bought while I worked.  Weekends were awesome…those were the days when I stayed up far too late — usually until 2 or 3am, getting a crapton of work done and rewarding myself with a bit of internetting afterwards.  And of course, by late 2004, I was IMing with A in our dorky long-distance courtship.

Oh, and speaking of Yankee Candle, I found a picture online of what I did there!  Not sure when this was made (probably after I left in early 2005), but my job consisted of building up pallets of product, and preparing them for the shrinkwrap machines underneath those shutes.  My buddy Bruce and I helped set up that section of the warehouse in April 0f 2001.  [If you watch this video that this image is from, my shipping department shows up around one minute in.  Yeah, it was a HUGE area.  I got a lot of exercise just walking from one end to the other.]  That warehouse was also the inspiration for Moulding Warehouse in the trilogy; I even asked one of my building managers about the safety and plausibility of people living in the storage bays so I could get the facts right.

And over the course of 2001 to 2005, when I wasn’t inundated with all those boxes (which, by the way, I can still tell you what’s in each of them and how heavy they were, just by that picture), I’d grab some scrap paper and do my outlining and map drawing.  My coworkers were always amused when I did that; they thought my writing gig was pretty neat!  I Tuckerized a lot of my coworkers’ last names in the trilogy; they’re used as either streets or minor characters.  They were just fine with that.

After I left Massachusetts and spent most of 2005 in New Jersey, A. and I moved out that December to San Francisco.  Our first apartment was on the corner of Stockton and Bay, just a few blocks from Fisherman’s Wharf.  The new writing nook, christened Arkham West, is where I attempted to refocus on my writing again.  It took a few tough years and a few trunked stories (including one completed and trunked novel) before I decided to restarted work on the trilogy in late 2008.  It was a very long and arduous process that eventually brought us to our new apartment on the other side of town in the Richmond District in late 2009.  My desk was briefly set up in the living room behind the couch, but I soon moved to the back room, aka Spare Oom.

Spare Oom is also our library, my Day Job office, a music room (my guitars are in here as well), a guest room, and also has the best view of Golden Gate Bridge and the Marin Headlands…when it’s not foggy.  Pretty much all my writing work is done back there, though I have been known to dust off my laptop and work in the living room instead.  It’s where I finished the trilogy back in 2010, and where I spent the last few years editing, revising, formatting and self-publishing the trilogy.