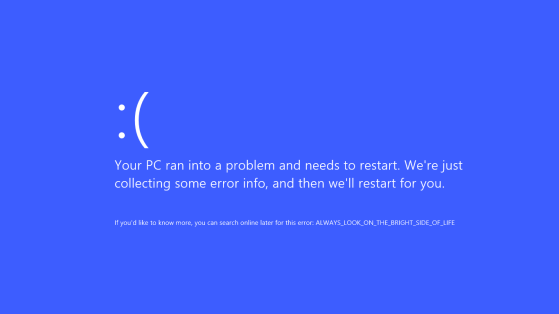 I really dislike the fact that my computers never last more than about three years.  I really wish they would last a lot longer.  I don’t mind a bit of a slowdown as it gets older, and I’m okay with what software I have…it’s okay if it’s not up to date, as long as it works correctly.

It’s been just about three years to the week since I bought this PC.  My previous one (another Gateway), which I probably had since…(checks LJ entries)…January of 2010.  Which means I bought that one not long after we moved to our present apartment.  And I know the one before that (a Gateway, natch) was bought sometime late 2006 or so, and that one replaced the Dell I’d bought in 2003 back in the old Belfry days.  [I don’t count the various Hewlett-Packards I had before that, because they were all hand-me-downs and lasted a few years at most.]

So yeah, that averages to about three years.

I say this, as it’s May 2016, and this current PC has started acting funky as well.  It hasn’t crashed and burned, at least not like the previous one, but it’s bluescreened at least five or six times over the past two months due to bad overwriting errors.  There’s also been an uptick of sluggishness, especially when I’m multitasking.  It’s also had a few startup issues lately, which is why I’ve been powering down via Hibernate rather than Shut Down.  I’ve already made it a habit of saving everything important on my external drives, and having my documents on Dropbox.

So as you may well imagine, I am grudgingly going computer shopping soon.  Here is my wishlist in terms of what I want it to have or be able to do:

I actually do not need a new monitor at this time — I’m actually still using the widescreen monitor from the previous Gateway.  The power button might be a bit wonky and loose, but it works just fine and hasn’t given me any trouble at all.

So I’m thinking, in the next couple of weeks or so, I may be taking a trip to Best Buy on Geary, or Fry’s down in Palo Alto, just to see what’s available.  I’m willing to put some money into this, considering it’s a unit I’ll be using on a daily basis, sometimes for hours at a time.

And if it lasts more than three years before I run it into the ground, all the better!

[Noted: For those of you who give thanks to the iGods, I have no issues with iThingies in general.  I just never got around to getting on board with them, and see no reason to do so now when PCs work just fine for what I want/need them to do.]